About Daniéle Huillet;
1) She left Sorbonne 30 min after entrance, being full of hatred and fear.
2) After withdrawal Sorbonne, she failed of the entrance examination of IDEHEC by no answers of examination paper. The subject was to analysis a film. She said "This foolish film doesn't have the analyzed value at all."
About Jean-Marie Straub;
1) In Venice Film Festival 2006, although their latest film "Quei loro incontri（These Encounters of Theirs）" was screened under the division of competition, they denied to go to the festival. Straub sent a letter to the director of the festival as this: "Besides I wouldn't be able to be festive in a festival where there are so many public and private police looking for a terrorist - I am the terrorist, and I tell you, paraphrasing Franco Fortini: so long as there's American imperialistic capitalism, there'll never be enough terrorists in the world."
See the detail --->kinoslang

"Quei loro incontri (These Encounters of Theirs)" is very beautiful and surprising film as same as other their films. In the first chapter, the actors have dialogue while they show their back in 10 min. The sunshine and shadow in the second chapter is as beautiful as the miracle.

Director Matsumoto of Athenee Francais Cultural Center said that at the end of the program, Straub revived and started to make the film which was planned with Hullet. I hope we would see the new film by Straub-Hullet again.


I remember a Korean gay performing artist based in China, who was totally a minority in China in these days, says in a documentary film I've seen 10 years ago. He says that he has self-confidence to live in anywhere in the world. Because wherever he goes, he can enchant people.
Today I realized that the person who doesn't say Yes, No or anything is unattractive. S/he is the same as no existence. We cannot survive unless we are existence at least and be attractive. 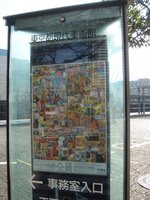 I've been in Tokyo from yesterday.

Screening of the latest three films by Straub-Huillet and a lecture by Akira Asada at Athenee Francais Cultural Center.

I met a frind Akiko at the venue aftrer the lecture by chance. We got a chinese dinner together at Ochanomizu.

December 10
Shinro Ohtake Zenkei Retrospective1995 - 2006 at MOT. (third time)
I could watch all works at last calmly, but still excited. I spent 8 hours to watch this great exhibition. I satisfied! 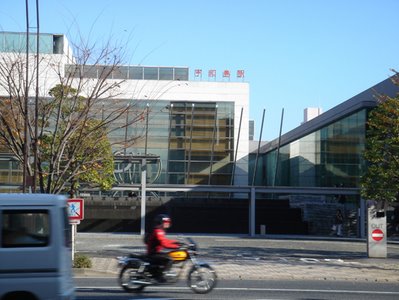 I've been watching the films by Kiju Yoshida from last month.
I watched the documentary video focused on Hana-matsuri (flower -spring- festival which be helt in mid-winter) in Oku-mikawa tonight.
He describes how the festival is an asyl for the people. The village people need to release from the strict class, the rigid society and the severe nature environment, and to be liberate from everything to contain themselves. Also he shows how grave ceremony for god (animism) is transforming to traditional performing art, which shared by people in all night festival. It's a history of performing arts. It tells that performing art (performer) has been the medium in which gods stay and the place where people can be in freedom. It's very interesting that the people are hospitable for oni - evil - as well as gods. The people feel familiar for oni which is the incarnation of severe nature, the film said. It's same as Balinese theatrical ceremony - Calonarang.
Needless to say, the film is very beautiful and formidable incredibly.

I've visited Hana-matsuri in Oku-mikawa more than 15 years ago.
I don't remember the name of the village. I remember that the people's fever and how the guys who participated in local were super cool. I really want to visit again. The festival in Shimo-kurokawa village will be held in the midnight on Jan 2 in 2007.

born in Kyoto. has studied and worked in Tokyo. lived in London before starting the Iraq war. After living rural areas in Japan for some years, was back to Tokyo. working in media art field.